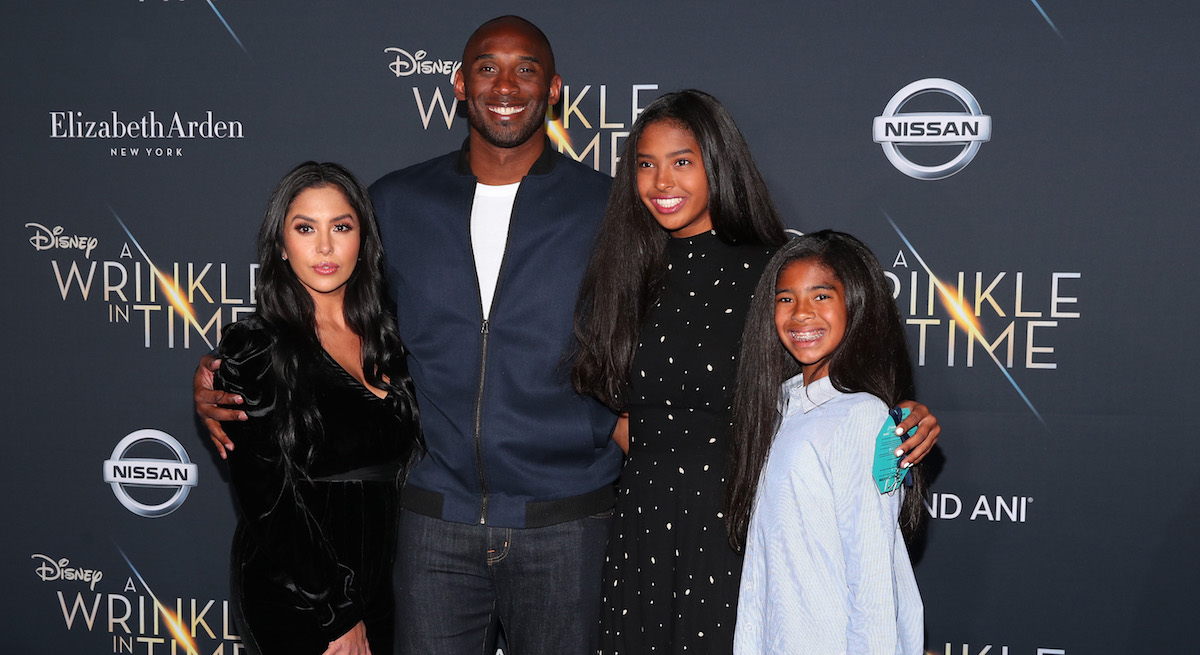 Kobe Bryant and his 13-year-old daughter Gianna tragically died the 26th of January 2020 in a helicopter crash en route to a basketball game in Ventura County, California.

But while the tragedy itself is well known, what many don’t know much about is how Kobe’s widow, Vanessa Laine Bryant, and their surviving children have coped with devastating loss over the course of the past year. After all, as the old saying goes, “It’s not what happens to you, but how you react that matters.”

Who is Vanessa Laine Bryant and how did she meet Kobe?

Vanessa Laine Bryant, 38, is a former model and music video star, as well as a media personality and businesswoman. Up until she met Kobe, Vanessa Urbieta Cornejo Laine was just a regular Latina teen growing up in Los Angeles, and had led a relatively sheltered existence.

The would-be couple met in 1999 on the set of a music video when Vanessa was just 17 and still in high school, and Kobe was barely into his 20s. She was modelling at the time, and he was already a basketball sensation after having been in the NBA for just three seasons.

Vanessa had a gig as an extra in a music video and, lo and behold, Kobe happened to be on set too, having decided to launch a side career as a rapper. Sparks flew. Her friends didn’t believe her at first, but  then they did. Their romance was one with staying power, but the uproar surrounding their relationship was so intense that Vanessa had to finish her senior year being home schooled. Six months in, Kobe and Vanessa were engaged, and they got married once she turned 18.

Given how young they were when they met, Vanessa and Kobe had 20 whole years of marriage together before his untimely death. Although their marriage hit some very stressful rough patches along the way (in part due to Kobe’s admission of adultery and an associated sexual assault accusation) which may have contributed to Vanessa suffering a miscarriage around that time, the couple pulled through, reconciled, and did their very best to honor their union and their growing family.

Just weeks before Kobe and Gianna’s tragic deaths, Showtime Basketball’s All the Smoke podcast ran an interview in which Bryant discussed just how it was that he and Vanessa had managed to make it through. Although their mutual drive to succeed was part of it, the rough times they weathered together also made them stronger, he said.

That’s all the beauty of it: having the persistence and determination to work through things — very, very tough things — and we’ve been able to do that.

Maybe it was exactly this determination to work through very tough things that has helped Vanessa Laine Bryant and her children make it through.

Vanessa and Kobe had four daughters together, and Kobe liked to call them his princesses. While Kobe’s relationship with his parents was strained, he was an attentive and devoted father to his kids. In the weeks leading up to his death, he posted numerous pictures of his girls. He was a very vocal about how proud he was of his daughters.

Just a week before his death, he celebrated the 17th birthday of his eldest girl Natalia, posting a gorgeous picture of her in a red dress. “Happy Birthday my baby. I love you beyond measure. You will always be my little Principessa #17,” he wrote. Natalia is known for her prowess as a volleyball player.

Gianna was a budding basketball talent keen on following in her father’s footsteps. She wanted to join the WNBA. In 2018, Kobe told Jimmy Kimmel, “I’m telling you, the best thing that happens is when we go out and fans come up to me and she’ll be standing next to me, they’ll be like, ‘You got to have a boy. You and V got to have a boy, somebody to carry on the tradition, the legacy.’ She’s like, ‘oi, I got this. You don’t need no boy for that, I got this.’ That’s right, yes you do. You got this.”

Bianka is just 4 years old and the couple’s third-born. She looks a lot like her father. Nicknamed “BB,” Kobe was known to share lots of pics with little Bianka. Vanessa maintains that she is a sweet, joyful child with a contagious smile.

Capri, born in June 2019, is the youngest Bryant, and was only six months old when her father and sister passed. Given “Kobe” as a middle name, her nickname “Koko” grew from that. At first, Kobe hesitated to give his youngest child his own name, but, as we all know, it turned out to be timely, as he had always said he hoped his children would carry on his legacy in some way.

Vanessa lost the love of her life

Anyone who’s ever lost someone close to them knows that you never fully get over it, but time heals all wounds—or so they say. Vanessa Laine Bryant and her children may not be over the tragic passing of Kobe and Gianna, but one thing’s for sure: they have stood by one another in support and love, propping each other up as needed, while also taking advantage of any opportunity to remember and honour their dearly departed.

In June, nearly five months after the crash, Vanessa celebrated Capri’s first birthday, posting an affectionate throwback photo of herself and Kobe cradling their baby girl. “Happy 1st Birthday Capri! Mommy, Daddy, Nani, Gigi and BB love you SO much!!!” she wrote. “God Bless you sweet princess. Capri Kobe Bryant a.k.a. ‘Koko-Bean’ named after her dearly missed daddy, Kobe Bean Bryant. We miss you SO much Gigi and Daddy.”

In fact, the Laine Bryant family has commemorated several important milestones without their lost loved ones, including what would have been Gianna’s 14th birthday in May. Natalia paid tribute to her late little sister on Instagram. Alongside a photo of the two sisters hugging and smiling, she wrote, “Happy 14th Birthday Gigi! ❤ I miss your smile everyday but I know you’re always smiling down on us from heaven with daddy. I LOVE YOU.”

On May 5, just four days after what would have marked Gianna’s 14th birthday, Vanessa celebrated her own birthday. Her daughters threw her a party, taking extra care with beautiful flower arrangements and an abundance of colourful piñatas to honor their mother. Natalia gave her a birthday card which read, “You are strongest person I know and I am so grateful to have you as my mom!”

Perhaps, the most heartbreaking reminder of her loss was finding a letter that Kobe had written for her ahead of her 38th birthday.

“Yesterday I found an envelope labeled To: The Love of my Life. From, Tu Papi,” Vanessa said in an Instagram post. “I waited to open one more letter on my birthday. It gave me something to look forward to today.”

The letter was also a reminder of the kind of relationship she and Kobe shared.

The irony is that Kobe had a photo of me drawn with an Angel holding me up by an artist on the cover. Missing the Love of my Life and my sweet little Mamacita – my fellow Taurus. Grateful to wake up to my 3 sweet girls today. Wish we were all together. #MyBirthdayWish.

What she has to say about grief

Almost a year after the tragic incident that took her husband and daughter’s lives, Vanessa opened up about dealing with grief on her Instagram story. She shared a powerful message that is sure to resonate with anyone who has experienced loss:

I want to say this for people struggling with grief and heartbreaking loss. Find your reason to live. I know it’s hard. I look at my daughters and I try to push through that feeling for them. Death is guaranteed but living the rest of the day isn’t. Find your reason.

Today, Kobe’s L.A. Lakers teammate Pau Gasol and his wife Cat McDonnell have formed a deep bond with Vanessa and helped her raise her kids. They regularly share heartwarming pictures of the Bryants on Instagram, calling them family.

There is no denying that Vanessa and her children will deal with their loss for the rest of their lives, but they have their reason to keep going. Sometimes, the reason is not evident. Sometimes, it can be very simple. Regardless, Vanessa’s powerful will to go on and show up for her daughters proves that there is a way to keep living, even after a devastating tragedy.

The post How Vanessa Laine Bryant And Her Children Are Doing After Kobe Bryant’s Death appeared first on Goalcast.

Published by The Digital Vibe Podcast and Network

I am a very successful Internet Entrepreneur, Podcaster and Producer, Motivational Thought Leader, Author,...theirs more to this story! My mantra is.."do what YOU love!" View all posts by The Digital Vibe Podcast and Network